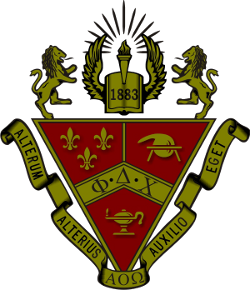 On November 2, 1883, 11 men at the University of Michigan formed the fraternity. At that time, there were a number of literary societies at Michigan, but Phi Delta Chi’s founders believed something should be organized exclusively for the College of Pharmacy. A Quotation from the early records reads: “Both students and faculty recognized that such an organization would bring students of pharmacy together for the discussion of scientific questions pertaining to pharmacy and its sister sciences.“

These 11 men wrote this preamble to the original Constitution of the Fraternity: “Recognizing the necessity of, and the mutual benefits to be derived from an Organization devoted to the sciences of pharmacy and chemistry, a careful investigation into, and a free discussion of subjects relative to the same; we do agree to form an association and for its government to adopt the following Constitution and By-Laws.“

Four years after founding in 1887, the society adopted a ritual, symbols, signs, and regalia. Then in 1896, a second chapter was organized at Northwestern University in Evanston, Illinois. The chapter at Ann Arbor then became known as the Alpha Chapter and the chapter at Evanston became known as the Beta Chapter. The third chapter, Gamma, was started at Columbia University in 1898.

Albert Benjamin Prescott (1832-1905) then Dean of College of Pharmacy at Michigan, encouraged the 11 founders in the formation of the society. He was made the first honorary member and then served as the group’s sponsor. Dean Prescott’s name has been associated with the highest and finest traditions and awards of the fraternity throughout the years. Prescott is acclaimed as an innovator in pharmaceutical education. He served the American Pharmaceutical Association as President in 1900 and at one timed assayed the gold for the US mint.

Originally the Fraternity was called Phi Chi. At the second meeting of the society a motion was made to change the name to Phi Delta Chi, but at that time, the motion failed. However, two medical fraternities founded in 1889 and 1894 also took on the name Phi Chi. Shortly after the turn of the century these two medical fraternities merged into one retraining the name Phi Chi. There was some disagreement as to who had the right to the name, but at the time there was a desire among the members of the pharmacy group to consider the name Phi Delta Chi. By 1909, the fraternity had grown to 14 chapters, and when they met in Grand Council at Chicago in March of that year, they proposed to change the name of the Fraternity to Phi Delta Chi, rather than pursue the disagreement with the medical fraternity. This change was ratified March 1, 1910, in New York City.

Phi Delta Chi originally accepted for membership men in the fields of pharmacy and chemistry, the latter including both chemistry majors and chemical engineers. During the depression days of 1928-1933 difficulties arose because the fraternity was serving two professions, and therefore membership requirements were changed to include the persons majoring in the field of pharmacy only. And thus Phi Delta Chi as we know it today was formed, a Professional Fraternity serving the field of Pharmacy.

Throughout the years, it has been a matter of considerable pride to Phi Delta Chi’s that the organization has not only been kept intact under conditions that were highly destructive to all types of organizations, but that always Brothers have come forward to carry on the work of the organization and to expand it. Since it founding in 1883, Phi Delta Chi has chartered 57 undergraduate chapters and has initiated 33,000 men and women into the Brotherhood.

Phi Delta Chi has numbered in its membership many illustrious leaders over the years. With the pharmaceutical manufacturing fields such names as Lilly (Epsilon), Weeks, and Meyer are familiar. High up in the administration of many other pharmaceutical firms are a great number of Phi Dex Brothers. Scattered over the nation are others who have become extremely well known in local areas for their ownership and leadership of various pharmaceutical enterprises. Other Brothers have become famous in the political life of the nation, the states, and local jurisdiction. On the list are Hubert H. Humphrey (Theta), a Vice President of the United States, several governors, many mayors, and large number of state legislators, several judges, many members of federal agencies in Washington and hundreds of local public officials.

Through the years, the Fraternity has met in national Grand Councils many times. These meetings are rotated through every region of the nation. Regional Conferences supplement the national Gatherings. The greatest experiences of fraternalism occur when Brother meet for these festive events.
The reason for Phi Delta Chi’s continued existence is due in large part to the interest that has been maintained throughout the past 100 years for the continued helpfulness of the brothers towards each other and their willingness to follow the purpose of the Fraternity originally advanced in 1883 at Ann Arbor:

“The object of the association shall be to advance the science of pharmacy and allied interest and to foster and promote a fraternal spirit among its members.”

Centennial celebrations in 1983 culminated with the dedication of a plaque at the University of Michigan School of Pharmacy that commemorates Phi Delta Chi’s one hundred years of accomplishments and the Fraternity’s commitment to the future.